I'm not so good at the con report stuff, but I do have some specific memories I want to share, so I hope you'll bear with me as I ramble of lists of memories.

First - thank you to Jan and the rest of the concom and Filk-track staff for making Duck an exceptional gathering of our particular micro-sub-genre.

Second - thank you especially to Megan who worked very hard on the sound tech all weekend. There were issues, but she was smart, diligent, and very kind throughout the entire thing. Megan rocks.

I got in on Thursday before the con. Picked up by Jan at O'Hare and taken back to her and Nick's house to drop my gear and join Talis and Dave in a pre-con rehearsal. One notable thing - I hadn't actually traveled by air for quite a while, and was therefore caught unexpected with the per-checked item fees. So I was a bit surprised when I realized that because I had chosen to bring my own guitars, it had cost me $160.00! My advice - borrow.

Many many thanks to Gundo and Jason of Toyboat who seem to have an unlimited supply of gear. Anything we needed, we could call them up and they'd not only have what we asked for, but also a choice between specific applications. It was like calling myself. :) I just wish I'd had a chance to play the bass banjo - but that's another story...

Okay - rehearsal. So I walk in the room seeing Talis and Dave, neither of whom I had seen in years, and rather than "Hello! How are you!" I am told by Talis "Hi. We're working on the Friday setlist, and are about half way through. We've changed the key to Am. Ready? Go..."

:) Anyone who has played in a band with Talis knows this is exactly how it goes, so I smiled, picked up the bass, and then we played for several hours. I'm glad we did, and it was great. After Talis retired to her chambers that afternoon, Dave and I had a chance to catch up, and I'm so glad we did. I really love that guy. :)

Thursday, the day of my arrival, also happened to be my 49th Birthday. Unbeknownst to me, Jan had invited people over for dinner in the evening, and it was all topped off with a birthday cake. It was a lovely surprise, and a great time.

I also want to mention here that before the con Jan had sent me an email query about what kinds of beer I liked and such. Also to my pleasant surprise I found that she had aquired EVERYTHING that I had mentioned. Which means the entire con got to enjoy Anchor Steam, Anchor Porter and a few Samuel Smith's Oatmeal Stout. It was just great. :) Has anyone else mentioned how great Jan is? Well, she really is all that and a bag of chips.

Friday was a lie in for all of us, and a bit of a late start, but we took the opportunity to rehearse a bit more in between packing up our things and making last minute arrangements for gear and stuff. But soon enough we were off to the hotel, and then the next adventure begins...

I've been meaning to get back into the LJ habit. So post-Duckon posts and rambling is as good enough reason as any.

Post-con blues hitting hard today... but even with that, I have been reminded of why I love going to cons as much as I do, and why I love the people who I am privileged to count amongst my friends even more.

Jan DiMasi should be given (another) award for what she has accomplished with the Music portion of DucKon. The issues this weekend were many and complex (each of a different world and sex!) but Jan handled it all with her usual good humor.

So hopefully I'll be remembering and recounting my adventures this weekend here. Or I won't - but at least I'm starting. :)

First - big thanks to Mycroft who recommended Edwardo's for genuine Chicago deep-dish. It was incredibly good. Jan, Talis and I shared an artichoke heart, spinach, mushroom and elephant garlic pizza that was to die for. If you go to Chicago, go to Edwardo's. Really. I mean it. Go ahead, I'll wait....

I don't know what they were thinking, but the kind folks at Duckon ( especially Jan DiMasi) have asked me to be the Filk Fund guest at Duckon in June of next year.

Talis Kimberley is the Guest of Honor, and we've already started talking about collaborating - and that's got me as excited as my own concert plans.

I'm very happy about this - I have some new songs to inflict upon introduce to the folks who are there - as well as the anticipated medley of my hit. And honestly, I had figured that filk had forgotten about me a long time ago. Kids and budgets and work and the like don't make for good con attendance - and I've been pretty much absent since my Toastmastership at OVFF a few years ago.

I'm looking forward to it - and I hope to see a lot of people there that I haven't seen in a long time.

Pre-Diabetes. Hemoglobin A1C is 5.9% .2% away from the Diabetes threshold.

So, no meds. Eat right and exercise, lose 20lbs and things should be better.

Call from the Dr. today - test results for my Glucose Tolerance Test are in, and they are "not normal". *sigh* I think the blood sugar monster has finally caught up with me. Into the Dr. office tomorrow - hopefully it's "minor" not normal, as opposed to "major" not normal. 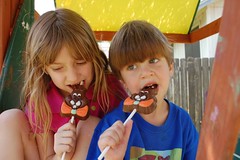 Crunch
Originally uploaded by Pafuts.
Easter is the time for biting the ears off of brown rabbits.

Yes, that's me. Mr. Herniated. Herniated disk at c7, bulging on right side, pinching the nerve which is causing the numbness and tingling in my right arm, shoulder, elbow and hand. Mostly, the numb forefinger that I've had for weeks.

Oh boy. Next stop - Neurosurgeon. My guess is the answer will be "Surgery Now" or "Surgery Later" - disks don't repair themselves, even with drugs and therapy.

So, I'm a little depressed about this.